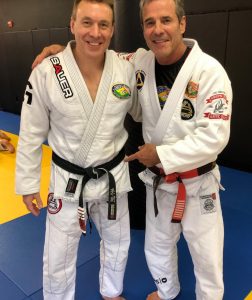 Brazilian Jiu-Jitsu is a modern self defense system developed from traditional Jiu-Jitsu by the Gracie family of Brazil. This program teaches one of the most effective martial arts in the world. The emphasis is on grappling, and ground fighting with armbars, chokes, throws, leg locks, takedowns, and stand-up self-defense moves. At the Renaissance Academy we don’t focus on forms, but rather, we focus on practical applications of Brazilian Jiu-Jitsu that translate into effective self-defense on the street or for competition. The techniques we learn are the same as those being taught to the military, police, and security personnel. Why? Because they are the most effective for controlling and subduing an opponent.

Register for your FREE trial today

Learn true Gracie Brazilian Jiu Jitsu and learn how to take anyone down, at any size, while having fun and getting in to incredible shape!  Classes are held daily for all ages and all levels.